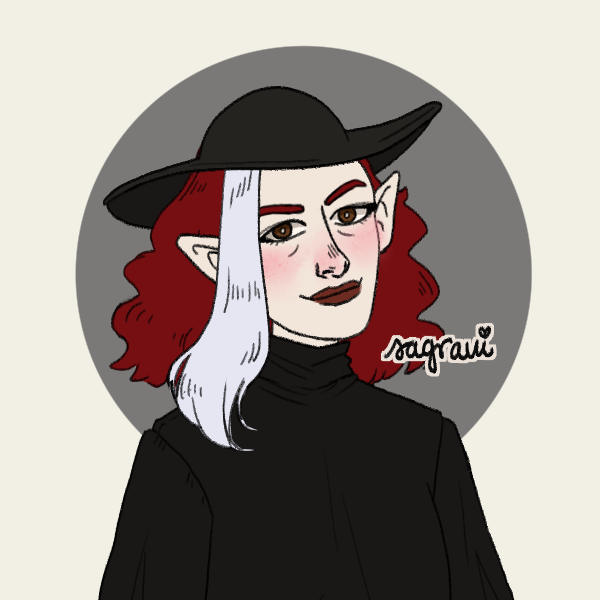 from this picrew by @sagravi

♦ Thieves' Tools - This set of tools includes a small file, a set of lock picks, a small mirror mounted on a metal handle, a set of narrow-bladed scissors, and a pair of pliers. Perhaps the most common tools used by adventurers, thieves' tools are designed for picking locks and foiling traps.

♦ Thieves' Tools -
hi ignore this bit thanks! its just for my own ref :)

The Witch (Witchless) is a bounty hunter. Her name is tied to many deeds, her reputation precedes her. And yet, there still is so much mystery, so many rumours being whispered around taverns. Joshua was once an adventurer, travelling the world with her friends. Many years have passed since then, and most of their group have retired. Some found their places in important positions of power, others in family. Joshua's thirst for adventure and danger never quenched, her job is still not done.

Sirene (8053) was one of the ones that found their place in power. She started out as a young cleric of Vega, filled with purpose and wanderlust. Now, she finds herself as the high priestess of one of the most important temples to her deity. Her job doesn't allow for much travel anymore, but that doesn't stop Sirene from meeting her companions from time to time.

Paciência (Paolinhafofs), on the other hand, often joins the Witch in her adventures, not having lost the taste for dungeon crawling and going into wild goose chases across the continent. She has important duties herself, but as a diplomat, it is part of her job to travel around. Sure, going to haunted ruins to deal with an abomination of nature is not part of the diplomatic job per se, but I'm sure the king can wait another day or two before P returns with the news.